Meet Our Family of Apple Growers 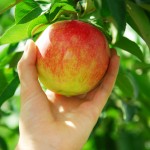 Ever wondered where the apples in Musselman’s apple sauce come from? They come from American family farms.  Musselman’s is actually a grower-owned cooperative made up of more than 100 fruit growers and their families, providing the best quality fruit for the best quality Musselman’s products. Let us introduce you to just a few of our proud families.

John and Carolyn Marker, along with their daughter, Heather Marker McKay, come from a long line of farmers. They run the Virginia-based Marker-Miller Orchards, owned and operated by members of their family for more than a century.

Now a thriving business, the Marker-Miller Orchards started as a family apple orchard selling fruit wholesale to companies like Musselman’s. From there, it evolved to selling a variety of fruits and vegetables to the public from the back of a truck shed. 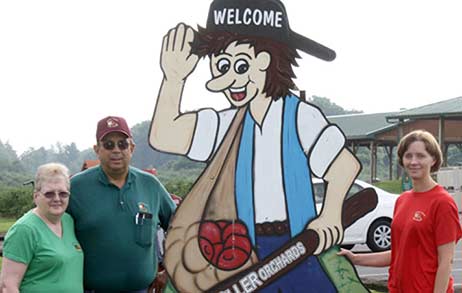 Though the Markers find the summer season’s abundant growth of fruits and vegetables exciting, it’s not until they look out across the orchards in the fall and catch a glimpse of the colorful apples that they know their hard work has paid off. 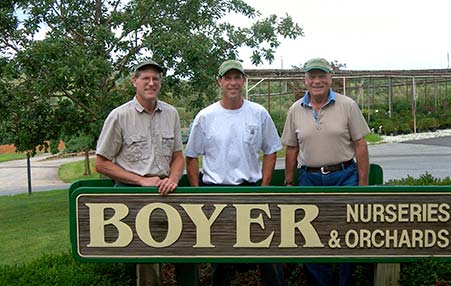 In 1900, William W. Boyer started a family farm that grew apple and peach trees and sold them to local growers. Today, Boyer Nurseries and Orchards in Biglerville, Pennsylvania, ships trees all over the country and boasts a full-service garden center and 500 acres of orchards. It remains in the family and is run by third and fourth generation family members William Sr., William Jr., and David Lower

Their land and orchards mean a lot to the Lowers, and plans are underway to secure conservation easements to preserve the farm for generations to come. The Lowers also love their cherries. Cherry season, in fact, has long been a family favorite. In 1971, on the fourth of July, The Washington Post featured the farm in the weekend traveler section, encouraging readers to venture out to the countryside to “pick-your-own” cherries. The next weekend, 300 cars showed up from the Washington, D.C. metro area, packed with families ready to pick their own cherries.

Forty-two years later, devoted pickers still come to pick cherries, blueberries, and apples every year. “It’s rewarding to see the same customers come back each season with their families,” the Lower family says.

The Wilson family farm in Aspers, Pennsylvania, dates back six generations to the mid 19th century. Mark Wilson continues the family tradition today, with help from his son, Nathan.

Today, the Wilsons enjoy doing what they do best — growing delicious, quality apples — and letting Musselman’s take care of getting their fruit in the hands (and tummies) of families.

With large orchards of apples and cherries, plus a “pick-your-own” blueberries field, the Wilson family stays busy through the spring, summer, and fall. Though they get real satisfaction from life on the farm — and wouldn’t trade it for anything — they’ve come to appreciate the Pennsylvania winters when everything slows down, and they can hit the ski slopes.

When William Lott founded his farm, Bonnie Brea Fruit Farms, in Gardner, Pennsylvania, in 1927, he started what is approaching a century-old family-owned and operated business. Today, William Lott’s grandson, Jim Lott, owns and operates the farm, and his daughter, Sarah, who just graduated from college, will soon join the business as a fourth-generation family owner. 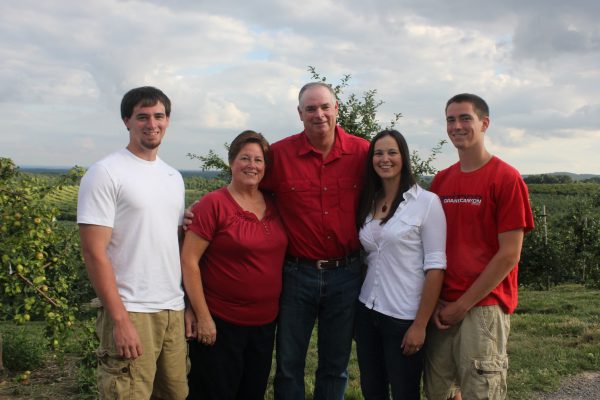 Other family members work in the business, too. Jim Lott’s wife, Barb, keeps the books and manages payroll, while his sons, Greg and Dylan, help grow apples, peaches, nectarines, and tart cherries in the orchards.

The farm name, Bonnie Brea Fruit Farms, comes from a Scottish Presbyterian minister, who was visiting William Lott when the farm originated, in the 20th century. Standing on Lott’s front porch, the minister looked out over the orchards and proclaimed “Bonnie Brae,” Scottish for “beautiful hills.” The name stuck, and the view remains much the same to this day.

At Musselman’s, we think of all of our fruit growers as part of our family. After all, it’s their love of farming that makes Musselman’s apple sauce so delicious